When people see a giant-sized superstar like Michael Strahan, they see someone who they imagine as strong and brave and never insecure. But the truth is, when this NFL icon moved from sports to TV hosting on Good Morning America, he wasn’t exactly as confident or as brave as he was on the football field. He genuinely felt like a fish out of water, completely overwhelmed at this new professional turn his life was taking. Thankfully, one of his coworkers who had been doing this for years was there to help Strahan with an assist.

While Strahan might look cool and collected now as a regular part of the GMA cast, that wasn’t always the case, and he was truly anxious when the gig started. Thankfully, rather quickly, Robin Roberts took the new host under her wing, filling him in on all the responsibilities and the ins and outs of the gig.

Strahan has gone to point out that she “saved him” at the time. While Roberts was helping Strahan with the day-to-day, there was one particular instance where she really helped the giant find his (literal) footing.

It was standing on the red carpet of his first Oscars when Strahan began to panic, which makes sense. It would be overwhelming for anyone, never mind the host. He went on to explain that incident, “I remember being at the Oscars on the red carpet and I was doing Live with Kelly at the time. I had never done an Oscar red carpet. I thought, ‘what am I doing on the red carpet and interviewing people? Before the stars started coming down the carpet I was so nervous and I could see Robin on the red carpet getting ready to do the ABC show. I see her and walk over and give her a hug. I tell her, ‘I’m scared to death. I’m scared’.

To her credit, Robin Roberts put her arm around Strahan and told him to take a deep breath and that he would be fine. He doubted it until she reminded him she came from a sports background as well, with her history in playing both basketball and tennis before becoming a sportscaster for ESPN.

Though Strahan had forgotten that, he quickly realized he was in good hands with Roberts, and judging from how cool and collected he is now on camera, safe to say her mentorship has had a very positive effect on him and his career trajectory.

Michael Strahan’s Latest ‘Career Move’ Is Out Of This World 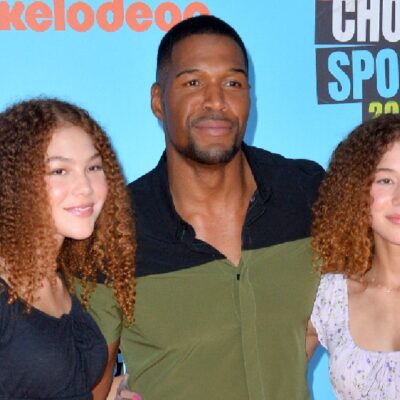 Michael Strahan Gets Emotional In Rare Tribute To Twin Girls

Michael Strahan’s Gorgeous Daughter Is Nearly As Tall As He Is, See Her In Action