For many, having joint pain or arthritis can make daily activities more challenging. In turn, they become hesitant, avoiding activities they once enjoyed. Unfortunately, arthritis treatments often vary depending on the type, so, finding the most effective one can be a challenge. In spite of this, a simple, all-natural remedy has been making waves online. Several reviewers call Turmeric Curcumin with Bioperine and Ginger by Nature’s Nutrition a lifesaver. It’s been able to treat all types of arthritis pain and its symptoms. But before we jumped on the bandwagon, we had some thoughts about this all-natural best-selling herbal supplement.

Despite its positive reviews, is it truly possible for turmeric, a popular spice in India, to reduce arthritis symptoms and improve quality of life? Surprisingly, yes! It can work just as well if not better than your typical nonsteroidal anti-inflammatory drugs (NSAIDs).

Turmeric May Be AS Effective As An Anti-Inflammatory Drug

Researchers have found increasing evidence that turmeric’s active ingredient, curcumin, contributes to the maintenance of joint health. Furthermore, it may also be as effective as some anti-inflammatory drugs (NSAIDs).

In fact, a 2014 study published in Clinical Interventions in Aging concluded that taking 1500 mg of turmeric extract a day was as effective as taking 1200 mg daily of ibuprofen for relieving pain. More recently, a study published in 2019 examined the effectiveness of turmeric compared with an anti-inflammatory drug called diclofenac, a potent NSAID.

A random sample of 139 patients with knee pain was randomly assigned either curcumin 500 mg three times a day or diclofenac 50 mg twice a day. The study found curcumin to be as effective as diclofenac, but it demonstrated better tolerability among patients with knee osteoarthritis (OA). Curcumin, therefore, might be a viable treatment option for patients with knee OA who are unable to tolerate the side effects associated with non-steroidal anti-inflammatory drugs.

Providing 1,650mg of turmeric curcumin per serving, Nature Nutrition’s Turmeric Curcumin with Bioperine and Ginger taps into this science for an effective dose. Nature’s Nutrition supplements alleviate joint discomfort naturally without the unpleasant side effects of NSAIDs.

In one reviewer’s opinion, it’s easier to tolerate turmeric than traditional NSAIDs, stating, “I cannot take the anti-inflammatories and pain medication I was prescribed because of stomach issues; that is why this is so fantastic for me; the results have been incredible, from going to pain on a daily basis to now having none.” Another customer said “say goodbye to ibuprofen,” observing that their inflammation had subsided without stomach upset.

Aside from reducing joint pain and increasing flexibility, what else can Turmeric Curcumin with Bioperine and Ginger by Nature’s Nutrition do?

Not Your Average Turmeric Supplement 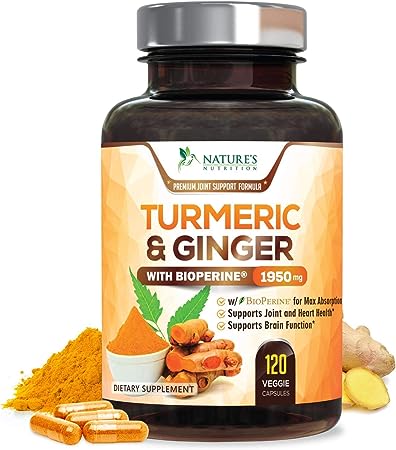 This vegan, non-GMO supplement is made in the USA and supports joints, heart health, and brain function according to its manufacture.

In addition to reducing temporary joint pain and increasing flexibility so you can enjoy your favorite activities again, Nature’s Nutrition is formulated with other powerful ingredients. Along with 1650 mg of turmeric, it contains 300 mg of ginger extract and 15 mg of BioPerine (black pepper extract).

While turmeric is an exceptionally powerful spice by itself, combining it with ginger and BioPerine increases its healing properties. According to Nature Nutrition, Turmeric with Ginger and BioPerine is highly absorbent for maximum efficacy, delivering 2000x better absorption than turmeric alone. Additionally, with this specialized formula, consumers will be able to experience increased joint comfort and immune support.

Looking at the science, piperine, a bioactive compound found in black pepper, has been proven to have anti-inflammatory effects. Moreover, it has shown promising results in terms of being able to accelerate the absorption of curcumin.

According to one study, adding 20 mg of piperine to two grams of curcumin increased bioavailability by 2000%. An article published by UMass Medical School explains how this may work. They explain that black pepper’s rich flavor comes from piperine, which inhibits drug metabolism as well. In the liver, foreign substances are made water-soluble so that they can be excreted. However, they noted that piperine inhibits this process by preventing the liver from excreting curcumin. As a result, this shows how piperine can increase curcumin’s bioavailability.

In addition to black pepper, this supplement also contains ginger, which has long been used as a natural remedy for a variety of ailments, such as nausea and pain. As Amazon’s best-selling ginger supplement, you can rest assured that it’s a true powerhouse.

Nature’s Nutrition’s special blend of turmeric and ginger may also boost immunity. A cancer survivor testified that this product played a vital role in their recovery, and urged others to follow suit. “Truly believe this product was a huge part of my healing” they stated. Further, they said, “Pass this info along and possibly help save a life.”

A number of reviewers have stated that Turmeric Curcumin with Bioperine and Ginger makes a noticeable difference. It is widely regarded as a miracle, while other therapies have failed to alleviate chronic pain. It is possible to regain your life and start doing the things you love, pain-free for an affordable price.

Try It For Yourself

This vegan, non-GMO supplement is made in the USA and supports joints, heart health, and brain function according to its manufacture.

ShopThe Secret To Shiny, Moisturized Hair This Winter Is Under $35
ShopI’m Giving Everyone On My Holiday Shopping List This Genius Tinted Powder Sunscreen-Here’s Why
ShopForget Video Games And Dolls–These Interactive Projects For Kids Is The Best Gift For Any Child On Your List
ShopThis Sustainable Luxury Handbag Line Is Featuring Major Sales For The Holidays Up To 50% Off